Special Feature by Chris Matthew Sciabarra — 11 Sep 2004 Be first to comment »
With catharsis comes healing. But for many, that path has been a long one. In this interview, one man who was in downtown Manhattan shares his thoughts and memories from September 11, 2001.

Over the past year, I have been interviewing a number of people who were in lower Manhattan on the morning of September 11, 2001, including some who were in the Twin Towers when they were struck.

It is very difficult for many of the survivors to talk about this tragedy, but it is my hope that, in time, I will be able to publish these interviews as exclusives of Not a Blog.

In the end, I believe that such re-telling is a necessary cathartic exercise. Though we seem to trot out such stories once a year, we do so only because the cliché is true: We must Never Forget, a maxim that applies not only to the tragedy and its historical context, but in honor of those who lost their lives, and of those who continue to bear witness. 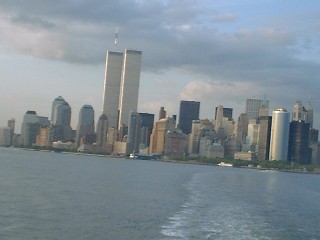 My friend Ray is one of those witnesses. He wasn’t my friend Ray back on September 11, 2001, but it is because he survived that day that we met in 2002 and became friends. Ray wasn’t quite 31 on 9/11. He was born in Manhattan on September 28, 1970. His parents came from Puerto Rico many years before, and he is one of 3 children. Ray has been a lifelong New Yorker, having attended school in Manhattan, the Bronx, and Queens, where he currently resides.

Ray has worked for a number of years as a Computer Specialist in the NYC Mayor’s Office of Operations, which was located on the 20th floor of 100 Church Street, one small block from the Twin Towers. On that sunny 9/11 morning, he was in his office preparing a slide presentation for then-Mayor Rudy Giuliani’s Management Report press conference, scheduled for September 12. It was 8:46 a.m.

First, I heard the soaring roar of a plane as it flew directly over my building. To me it sounded like thunder — we’d had a thunderstorm the night before — or maybe like a jet fighter. A few seconds later I heard the impact of the plane as it hit the first tower. I felt my office shake. I then heard screaming coming from outside my window and I turned around immediately.

It was then that Ray "saw a huge hole in the first tower. Flames and thick black smoke were coming out of the hole," he remembered, "but I saw no plane sticking out of the tower." Like almost everybody else in lower Manhattan that day, Ray thought to himself: "Oh my God, what a horrific accident." It was simply unfathomable that anybody could have actually done this on purpose.

"I was glued to my office window watching the event take place," he said. "I had a perfect view of the towers as they stood directly in front of my window." These sights would be seared into his consciousness as if by the very flames engulfing the upper floors of the North Tower. "As I was watching, I could see people above and below the hole in the building breaking windows and sticking their heads outside. Some were waving white cloths outside the windows." Turning to his boss, he wondered how those people above the hole were going to get out.

Within minutes, the smoke and flames became worse. "That is when I saw something fall out from the side of the building." He shouted to his boss: "Oh my God, someone jumped!"

This was not possible. "That must have been debris," his boss pleaded. But something fell out from the building again. "I could clearly see it was a person," he recalled. He shouted again: "People are jumping out!" His boss focused briefly on this unfolding nightmare, and turned away. At that moment, a co-worker came screaming into the office; her disabled brother was working in the North Tower. Concern for his life overwhelmed her; her legs became weak and she collapsed. Ray dragged her to a chair in the office, trying his best to comfort her. (Her brother was one of the fortunate survivors.)

By this time, staff were filing into Ray’s office, because it provided the best view of the Twin Towers. They stood there, watching the fire, watching the people jump. It was barely after 9 a.m. Another co-worker shrieked: "I see another plane!" United Airlines Flight 175 struck the South Tower — just as American Airlines Flight 11 had struck the North Tower minutes before — this time in full view of all those who were watching. The impact shook Ray’s office building. Almost instantaneously, Ray "saw a huge piece of the plane shoot out from the second tower, heading in a decline curve" right in the direction of his building. "It’s gonna hit us!," he hollered. 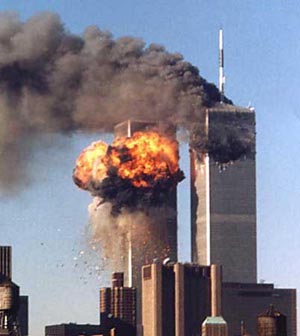 The staff ran for cover into the fire stairwells; Ray ran to the First Deputy Director’s office to get her out of the building because the fire alarms weren’t engaged. When the wreckage failed to hit his building, he ran back to his office to recover his backpack.

Speeding down the fire stairwells to ground level, he got to the corner of Church Street and couldn’t process the chaos that was lower Manhattan. He thought he might get his car, parked across from 7 World Trade Center. But a police officer shoved him in the opposite direction. "Go North," the cop cried. (Several months later, the FBI sent him a picture of his car, which had been removed and taken to the Fresh Kills Landfill in Staten Island — along with all the other debris from Ground Zero. Because of possible asbestos contamination, the car was deemed unusable.)

He started to evacuate north, and then his cell phone rang. It was his sister. She had just gotten off the train for work, but her office in the Chelsea neighborhood of Manhattan was dispersing for fear of another air attack. He walked north to 14th Street, but turned around to the sounds and sights of a collapsing South Tower. Meeting his sister on the balcony of her office, he watched the North Tower crumble too, the skyline of lower Manhattan now engulfed in a cloud of soot.

The bridges and waterways around Manhattan island provided an escape route for thousands of frightened human beings. Ray and his sister walked to 59th Street and then over the Queensborough Bridge into Queens. On that bridge, he could see that the thick cloud had drifted into Brooklyn. His cell phone didn’t work, but he was able to contact his brother from a local diner. It wasn’t until 6:30 p.m. that his brother arrived to pick them up.

For Ray, the tragedy was only beginning. He knew 2 people who worked at the WTC. One was a former co-worker who was killed that day. The other was his cousin Harry. After the first plane hit the North Tower, Harry called his wife. He was going down the stairs, Harry explained to her, approaching the 42nd floor. He told her: "I love you and I’ll see you later."

That was the last time they ever spoke.

Some weeks later, Ray’s family held a memorial service for Harry. It was a very emotional day for everyone because Harry’s body hadn’t been recovered. "Everyone told stories of encounters with Harry. Funny stories, sad stories, stories of arguments and forgiveness."

Four months passed. Harry’s leg was recovered and positively identified. The family had another, smaller ceremony, and buried the limb in a cemetery plot.

Ray was haunted by the events that he’d witnessed, which played over and over in his mind. He had vivid nightmares of the planes crashing into the towers, the flames shooting out from the windows, the windows shattering and raining down on him, people jumping from the skyscrapers. He struggled even with sounds of approaching planes.

Anytime I would hear a plane flying over, my heart would drop and I would become very anxious. I would cover my ears to block out the sound and I could not stand still in one place until the plane flew away. It was very difficult having to live like this.


He became much more observant of his surroundings while walking the streets and traveling on subways. Eventually, when he had to take a plane trip, he had an awfully difficult time dealing with the possibility that he might be among the next victims of a fatal hijacking.

The night before I was to fly out, I said good-bye to my family and told them I loved them, just in case anything would happen on my flight.... When I boarded the plane, my heart raced. When the plane took off, I felt every bump and heard every squeak that the plane made.

Ray did return to work. His office was moved over 20 blocks north of Church Street, awaiting the construction of a new facility that would become a permanent home. Time has helped to heal many of Ray’s spiritual wounds, but like all of us who might occasionally travel by Ground Zero, he still has "an empty feeling … knowing that once there stood a breathtaking monument."

Someday, a new Freedom Tower will be built in its place, along with a memorial park. Ray knows that it is the power of memory that provides a fitting tribute to the heroes, victims, and survivors of that tragic September day.

Chris Matthew Sciabarra is a Visiting Scholar in the Department of Politics at New York University. He is the author of the “Dialectics and Liberty” trilogy, which includes Marx, Hayek, and Utopia (SUNY, 1995), Ayn Rand: The Russian Radical (Penn State, 1995), and Total Freedom: Toward a Dialectical Libertarianism (Penn State, 2000). He also co-edited, with Mimi Reisel Gladstein, Feminist Interpretations of Ayn Rand (Penn State, 1999), and is a founding co-editor of The Journal of Ayn Rand Studies. He maintains an expansive web site, which includes links to his frequently updated “Not a Blog.”
Share

The lush Italian screen adaptation of Ayn Rand's first novel! See the Atlasphere's full review of the movie as well as our two-part interview with producer Duncan Scott... »More
The Ideas of Ayn Rand
By Ronald E. Merrill