Below is the second excerpt from Erika Holzer’s new book, Ayn Rand: My Fiction-Writing Teacher.

In the first excerpt, Holzer talks about deciding to quit the law profession and become a writer. In this chapter, she explains Rand’s take on inspiration and her practical advice on making sure you have it when you need it.

Every fiction writer who has ever manned a typewriter or, these days, a computer, has experienced the dreadful, debilitating blank-page syndrome. To extricate yourself, you can run the gamut from voodoo and other mystical delights to three-mile jogs around the park to “reaching a higher plane” via alcohol and drugs –

Or, anticipating such dry spells, you can put yourself on the daily premise of paying attention to what goes on around you so that when you need some fact or detail or the piece of a plot line for a story you’re working on, up it pops out of your subconscious.

Stoking it was one of the first and most basic lessons Ayn Rand taught me.

The idea is to personalize news events, books, films, people you share a bus or a subway ride with or – the list is endless.

The technique, if done properly (it’s easy), pays dividends that are endless, too, because chances are you’ll never fall prey to a paucity of ideas and the means to translate them into your kind of story. All that’s required is for you to take stock of any significant reactions, good or bad, to whatever you observe in life – whether it’s something you’re reading or a movie you’ve just seen or your emotional reaction to some clueless movie star making political pronouncements, some politician caught in a scandal or, on the upside of life, an act of heroism or an inspiring love story. In other words, tune into what piques your interest or curiosity, to whatever makes you mad, sad and glad.

Let’s say you read the following headline in the New York Post:

You might wonder aloud, "Caused by what? An accident? Negligence, maybe? Or something more sinister...?"

Suppose you just bought the latest novel by the author of the hugely popular bestseller, The DaVinci Code, and you’re perusing it to see if it’s as good as, or even better than, its predecessor – or maybe worse. Go ahead, make a judgment about the author’s pacing in this one. Does it move like a freight train with failed brakes? Or are you having trouble keeping your eyes open and you’re only up to Chapter Three?

You’ve just tuned in to a “hot” new sitcom – at least, that’s how it’s been touted in your television guide. The star of the series sashays into view. If your instantaneous response goes something like this – She’s supposed to be sexy just because she wears miniskirts and sticks a ring in her bellybutton?! – make a mental note of your negative reaction. It could come in handy later on. 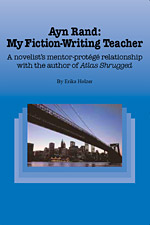 I once witnessed such a delightful display of youthful independence on a Madison Avenue bus that, almost thirty years later, I still retain a vivid impression of it. Across from me sat a spiffily dressed boy whom I immediately pegged as a pintsized Little Lord Fauntleroy – no more than five or six years old. What was special about him was how self-contained he was – not one of those fidgety, attention-seeking kids who make you want to pull the cord and get out six blocks short of your destination. His inattentive mother was talking nonstop to another woman, and when the boy warned her that the bus was approaching their stop and she kept on talking, he actually shrugged and calmly returned to his coloring book, as if to say, “Have it your way, Mom.” (I suspect Little Lord Fauntleroy will make an appearance in some future novel or short story of mine.)

All of the above constitutes “stoking.” It has become so automatic (as Ayn predicted it would) that I no longer have to give myself a conscious order to do it.

Being on automatic in this fashion explains why, when I first heard about Francis Gary Powers’ U-2 plane being shot down over the Soviet Union, and later read about his highly publicized exchange for convicted Soviet spy Rudolph Abel in the middle of a bridge between East and West Germany, I was primed to notice how these events fascinated me – how gripped I was by this dramatic situation. No surprise, then, that years later as I labored over the plot for my novel, Double Crossing, Glienicker Bridge, where the exchange took place, would end up playing a vital role in the novel, rising almost to the level of a character.

As I mentioned in the my remarks before Chapter One, I did a series of authors’ luncheons when Putnam released Double Crossing in 1983. During one spirited Q and A, when someone in the audience asked about Ayn Rand’s influence on my work, I wound up talking at great length about Ayn’s technique of stoking one’s subconscious:

The whole idea of staying in touch with what you react to, followed by why, is to start a process of self-discovery going that ends up telling you what you like and what you don’t.

This knowledge can be tremendously helpful, both as a writer and as a reader. Personally, I have found it to be a sure-fire way of tapping into my own values.

Years later, I told a similar group how the stoking technique had worked for me in Eye for an Eye:

It was because I’d monitored my own response to the ordeal of a whole spectrum of real-life violent crime victims that it turned out to be relatively easy, once I was into plotting Eye, to choose the kind of events and turning points that would move the story forward.

I began with the rapidly changing state of mind of my mother/narrator – from numbing disbelief to depression to anger to a fierce commitment to see justice done – all of which led to her acting outside the law. I interspersed the action with the heroine’s myriad doubts, fueled partly by the changed lifestyle – the furtive existence – that goes hand in hand with such an extreme course of action, and partly by an improbable and ultimately dangerous romantic conflict.

Why do I say it was easy? Because I had gleaned a wealth of information – not just from research per se – but by paying attention to what was going on in the general culture about violent crime and about crime victims. This sort of “education” made it possible for me to immerse myself in one woman’s suffering and come close to experiencing the horror, not just of losing a beloved daughter to vicious juveniles, but of being “chewed up” by the legal system, as well.

I had no trouble virtually slipping into my protagonist’s skin. She – along with my subconscious – virtually took over as, step by step, I was able to pull the reader in with me, as well.

That same week, a reporter from a Westchester newspaper, who had read the novel, asked me if I’d written it from the perspective of an actual crime victim.

It’s a good thing she’d liked the novel. Otherwise I’d have come down hard on her rather than making an earnest effort to educate her on the subject. “Unfortunately, you’re not the first person to ask me this question – or worse, to assume it – and, frankly, the implications disturb me,” I told her.

“Look,” I said, “you just finished telling me how well I was able to dramatize – accurately, and with deep feeling – what victims of violent crime and their families go through. That’s because I am blessed, or cursed, depending on how you look at it, with a great capacity for empathy and a strong sense of injustice.”

Write about what you feel, Erika.

The reporter looked at me expectantly.

“Because I was able to do this so effectively,” I said, “people assume I couldn’t have written about anything that harrowing without having personally experienced it. Ask yourself what this says about our capacity, as human beings, to empathize with others. That we can’t do it unless it first happens to us? Must we be rape victims in order to make real to ourselves the horror and humiliation of being raped? Are we unable to get inside the psyche of a grieving mother whose child has been murdered without being that mother?

“This attitude can have a dehumanizing effect on people, whether they consciously realize it or not. It’s almost as if, absent a personal involvement of some kind, we all get a pass. We can blip that rape victim or that grieving mother from our radar screens without giving them a second glance.”

Needless to say, the reporter got the point.

I would have occasion to repeat it many times, unfortunately. Some people never really grasped how stoking my subconscious by tuning in to the suffering and frustration of crime victims made it possible for me to write Eye for an Eye with such understanding and compassion.

Erika Holzer is a lawyer-turned-writer who has published two novels, Double-Crossing and Eye for an Eye, as well as numerous articles, essays, and reviews. Additional information about her writings can be found on her web site, at www.erikaholzer.com. She lives near Palm Springs with her husband, Hank Holzer.
Share

To post comments, please log in first. The Atlasphere is a social networking site for admirers of Ayn Rand's novels, most notably The Fountainhead and Atlas Shrugged. In addition to our online magazine, we offer a member directory and a dating service. If you share our enjoyment of Ayn Rand's novels, please sign up or log in to post comments.
Matt C 2008-06-20 16:00:02 UTC
0 points

There is some powerful information here. I have taken note that this excerpt "stoked" me. The concept Holzer describes here is quite simple and that adds to the potency.
To post comments, please log in first. The Atlasphere is a social networking site for admirers of Ayn Rand's novels, most notably The Fountainhead and Atlas Shrugged. In addition to our online magazine, we offer a member directory and a dating service. If you share our enjoyment of Ayn Rand's novels, please sign up or log in to post comments.
In the Atlasphere
Search Directory
Books and DVDs » See all
Touched By Its Rays
By Walter Donway

A successful banker's life changes forever when he's jailed for murder. Can there be any cause for hope? One of the most popular movies of all time, and for good reason... »More
View our full store »