Steven Vincent: A Profile in Courage

Column by Stephen Browne — 20 Sep 2007 2 comments from readers »
It takes courage to face an intense physical threat. But it also takes courage to wage the slow, grinding battle against tyranny. Journalist Steven Vincent was one such hero. His story is one you should know.

Courageous behavior is often defined as acting in a way that one thinks is right, or necessary, even when doing so is frightening.

But it seems to me that there are really two ways in which courage is expressed: There is the courage that one needs to face an immediate terrifying threat such as men face in battle, and then there is the courage needed to face long periods of lower-level fear, misery and depression — the kind that people who live in tyrannies face every day of their lives.

By this last definition, I find that I have a lot of heroes among my friends.

My son’s godmother is an Englishwoman who married a KGB defector shortly after the Second World War. They delayed having children for twenty years while they waited to see if an assassin was coming to call.

A friend is vice-president of the major opposition party in Belarus and associate editor of an opposition newspaper. He is probably safe enough from assassination, as he is rather high-profile internationally. But he carries his own food with him when he travels, mindful of what happened in Ukraine to another high-profile dissident.

Another friend is a long-time Serbian dissident and founder of the Yugoslav Movement for the Protection of Human Rights. Now that Yugoslavia has the beginnings of a functional democracy he lives in obscure poverty, regularly tormented in many petty ways by the local thugocracy.

And then there is someone I never met, Steven Vincent, who died for his beliefs and his honesty.

Vincent was a freelance journalist working under unique conditions. He had physical courage, but more importantly he had moral and intellectual courage.


He was, of all things, a New York art critic. He had traveled quite a bit in Southeast Asia and even Iran but he'd never been interested in working as a war correspondent. Then he watched the twin towers fall on September 11, 2001.

In the aftermath, Vincent was part of the intellectual camp that believes the United States, and indeed all of Western Civilization, is at war with a widespread ideology based mostly, though not exclusively, in the Arab world.

This ideology feeds on those consumed with humiliation at their failure to adjust to modernity, envy of the spectacular success of the West, loathing of the easygoing hedonistic nature of Western civilization, and fearful of the advance of democracy, tolerance, and the emancipation of women.

Vincent thus became a supporter of the invasions of Afghanistan and Iraq, but no mere pro-war ideologue. He felt that something as dreadful as the decision to go to war imposes moral obligations on those who make it and those who support it. He wrote in Reason Online, (March, 2004):

“I had come to Iraq to test my beliefs. Back in New York, I’d been a firm and vocal backer of the war, though not necessarily of the Bush administration. After witnessing firsthand the horrific evens of 9/11, I felt the civilized nations of the world had to take on terrorism at its roots — roots that included the Middle East’s legacy of poverty, hopelessness, and despotism, epitomized by, among other tyrants, Saddam Hussein.

“Saddam may or may not have contributed to the murder of 3,000 people in downtown Manhattan, but I believed a free and prosperous Iraq, spreading ripples of democracy and the rule of law from Damascus to Riyadh, was a key element in preventing similar attacks in America or elsewhere.

“But a question had always nagged me. How could I truly endorse the war unless I actually went to Iraq? How did I know my assumptions were actually correct? And so last fall I traveled to the cradle of uncivilization, staying in Baghdad from mid-September to late October, with a four-day trip to the southern city of Basra.”

This was to be the first of three trips to Iraq. Finally, in the summer of 2005 he was abducted and murdered.

The immediate cause of his murder is not known for certain, but it appears highly likely that it was in reaction to his last article, exposing the infiltration of the new Basra police force with Al-Sadr partisans who had organized death squads targeting former Baathists, and the indifference of the British forces that were nominally in control of the city. 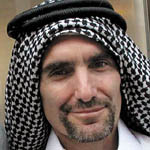 Steven Vincent went to Iraq to find the truth of events for himself and pursued that truth wherever it led him. He published mostly in right-wing journals such as National Review Online, but also in the libertarian publication Reason, the moderate-liberal Christian Science Monitor, and hit the big time (for a freelancer) with articles in the New York Times and Wall Street Journal.

He caused some consternation on the right and won the respect of some on the left when he participated, from Basra, in a symposium held by the right-wing Front Page Magazine and said that “Something’s not working right.”

While the other panelists were hailing the successful reconstruction of Iraq, Vincent gave the administration’s efforts a C minus at best and held that success would ultimately be measured by the quality of life for ordinary Iraqis. It would be measured by “...whether an Iraqi housewife feels safe enough to walk to the market. Or parents can let their children go to school without fear of kidnappers” (quoted in Daily Kos, August 5, 2005).

In Iraq he talked with intellectuals and artists, police officials speaking not for attribution, ordinary men and women trying to make a life in the post-liberation chaos, and over a hundred cab drivers.

He met people who were indeed grateful for the U.S.-led liberation from an unspeakably cruel tyranny, but also found a deep current of humiliation that it took a foreign invasion to accomplish it. “I hate Americans, I hate Saddam, I hate Iraqis, I hate myself! I need a Valium” is how one woman in Baghdad put it.

Steven Vincent definitely knew which side he was on, but he tempered conviction with a respect for other opinions: “I don’t mean to overstate the problems facing the U.S. in Iraq. Still it bothers me to see supporters of the war assume that events are going better than the ‘biased’ and ‘liberal’ media depict them. That may be true sometimes, but not always.

“Iraq is too complicated for such simple analysis. ... Now when I’m asked if the U.S. can succeed, I can only join others in answering: ‘We must. The prospect of failure in Iraq is too catastrophic to conceive.’”

This is the hallmark of true moral and intellectual courage, the willingness to take sides while always bearing in mind that you could be wrong — a kind of courage far rarer than physical courage.

Vincent stayed in Iraq longer than he should have, after publishing his last story. What happened to him was what happens to many who travel in the really appalling countries of the world, where obscure men and women are engaged in a heroic day-to-day struggle just to survive and make some kind of normal life for themselves and their families.

One comes to love these people to the extent that one cannot bear not to share their danger, forgetting that they have a lot more experience in coping with their situation than you do.

Vincent also found that he had responsibilities to people who had risked everything to help him tell their story. Much was made of the fact that he was planning a nominal conversion to Islam to marry his translator and take her out of the country. (His translator Nour Waidi had been with him when he was abducted. She was shot also but survived.)

According to his widow, Lisa Ramaci-Vincent, this was planned with her help and approval, because Waidi’s life was in danger. Now Ramaci-Vincent is attempting to sponsor Waidi’s immigration to the U.S.

Though not a soldier, Steven Vincent lived and died by a warrior ethic — to never leave a comrade behind. He followed the story where it led, not where he wished it to go. He was my ideal of an independent journalist.

Stephen Browne is a writer, editor, and teacher of martial arts and English as a second language. Currently he is interning at Human Events magazine in Washington, D.C.  He is also the founder of the Liberty English Camp, held annually in Lithuania, which brings together students from all over Eastern Europe for intensive English study using texts important to the history of political liberty and free markets. His regularly-updated blog is at rantsand.blogspot.com.
Share

To post comments, please log in first. The Atlasphere is a social networking site for admirers of Ayn Rand's novels, most notably The Fountainhead and Atlas Shrugged. In addition to our online magazine, we offer a member directory and a dating service. If you share our enjoyment of Ayn Rand's novels, please sign up or log in to post comments.
Steve H 2007-09-20 13:10:07 UTC
0 points

Thank you Mr. Brown for telling us of the courage of this man. Too many heroes are forgotten. Without courage we are all lost. Men like Steven Vincent are among the many individuals who make Western Civilization great, and worth tireless dedicated defence. The Islamofacist murderers must be defeated with whatever means we have at our disposal. The spread of truth about the enemy who wants to kill or subjugate us all is our first weapon. Next are the guns, bombs, and soldiers to destroy these enemies who murder the innocent and destroy the good. Steven Vincent was part of the first wave.
Christpher O 2007-09-20 13:47:35 UTC
0 points

It's clear that Vincent's personal opinions were generally held in check while he was reporting on the events that were happening around him. This is an admirable quality and one truly difficult to maintain. I feel terrible that he has been dead for two years and yet I know so little about him. I will make a point of sending an e-mail to everyone I know talking about the courageous Stephen Vincent.
To post comments, please log in first. The Atlasphere is a social networking site for admirers of Ayn Rand's novels, most notably The Fountainhead and Atlas Shrugged. In addition to our online magazine, we offer a member directory and a dating service. If you share our enjoyment of Ayn Rand's novels, please sign up or log in to post comments.
In the Atlasphere
Search Directory
Books and DVDs » See all
Shawshank Redemption
Starring Tim Robbins

A successful banker's life changes forever when he's jailed for murder. Can there be any cause for hope? One of the most popular movies of all time, and for good reason... »More
We The Living (Movie)
Starring Alida Valli

The lush Italian screen adaptation of Ayn Rand's first novel! See the Atlasphere's full review of the movie as well as our two-part interview with producer Duncan Scott... »More
View our full store »