Thales Day: The birthday of reason 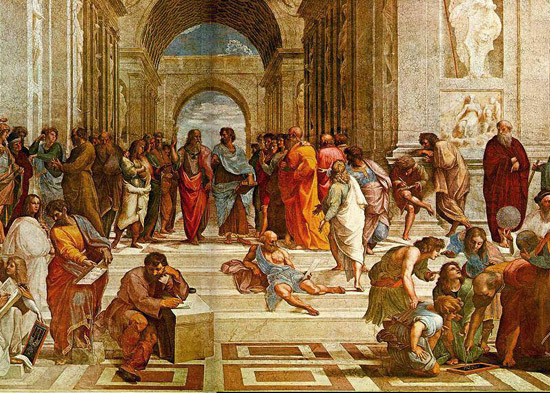 The story of how the scientist-philosopher Thales came to predict a solar eclipse in 585 B.C. is an inspiring lesson in the triumph of rational, independent thinking. Lovers of reason should celebrate accordingly!

On May 28, 585 B.C.E., there was a solar eclipse visible in Asia Minor. Aristotle tells us that this eclipse had been predicted a year before by Thales of Miletus, a scientist, a philosopher, and a hard-headed businessman.

The unusual thing about this prediction is that Thales made it on the basis of observation and reasoning, rather than by consulting omens such as the entrails of an owl.

How did he do it? Well, unfortunately, he did not have any insights into astronomy, or into the building of astronomical instruments. If he had, then he would have been able to predict the day of the eclipse and not just the year.

What he did instead was travel to Babylonia. There he found the records kept of eclipses and other events by Babylonian astronomers and astrologers (at that time they made no distinction between the two) for hundreds of years.

Thales realized that by studying this raw data he could find patterns. That is how our brains work; we look for patterns in the data provided by our senses. That’s why we humans love music and puzzles of all kinds. Thales could see that there was an eclipse every N years, and 585 would be an N year, ergo, there would be an eclipse.

Thales lived from about 624 B.C. E. to about 546 B.C.E. He was involved in politics, and ancient sources also tell us he once predicted a bumper crop of olives, and bought up all the presses he could find — which he then sold to the farmers when his crop prediction came true.

The unusual thing about this prediction is that Thales made it on the basis of observation and reasoning, rather than by consulting omens such as the entrails of an owl.

What Thales did with the Babylonian astronomical raw data was a tour de force of complete thinking: he used induction, followed by deduction. First, he induced from the data the generalization that eclipses occur at certain intervals, then he deduced that 585 would be the next year in that pattern.

People tend to become overly fond of one of those two operations at the expense of the other, and that does not work. The “intellectual,” especially, tends to be too deductive and not sufficiently inductive.

He creates a theory and then, like Pygmalion, he falls in love with his own creation. He starts predicting future events all over the place, based on his pet theory. Eventually something happens that his theory does not account for, and he gets all upset, because he is unwilling to amend his theory.

Thales’s successful prediction caused a wave of enthusiasm for science in Greece.

With such a philosophy, mankind would be liberated from the purveyors of religious revelations of truths that only they can know and the rest of us must take on faith.

Thales’s eclipse meant that every man could be his own scientist and philosopher. A distinction started to be made between religion, which tells you what to think, and philosophy, which teaches you how to think.

May 28 should, therefore, be celebrated as the birthday of reason by all mankind.

Remember crayoning and cutting out pictures in elementary school? If you are old enough, you might remember Captain Kangaroo on TV and his construction paper and safety scissors. Turkeys and pilgrims for Thanksgiving, and three ships for Columbus Day.

Imagine the child of the future, in every land and tongue, learning about Thales in first grade, and drawing pictures of solar eclipses. Then, in middle or high school, he will learn about induction and deduction, and about the deeper implications of Thales’s feat: the fact that anyone could make the same prediction, that we live in a universe of objective facts open to the understanding of all, and that no priesthood has an exclusive pipeline to truth.

Frederick Cookinham gives New York City walking tours, available through In Depth Walking Tours — including five on the subject of Ayn Rand and six of Revolutionary War sites.  He was interviewed at the Atlasphere in 2005. He is the author of the book The Age of Rand: Imagining an Objectivist Future World and has also written articles for The New Individualist, Nomos, Full Context, and The Pragmatist.

To post comments, please log in first. The Atlasphere is a social networking site for admirers of Ayn Rand's novels, most notably The Fountainhead and Atlas Shrugged. In addition to our online magazine, we offer a member directory and a dating service. If you share our enjoyment of Ayn Rand's novels, please sign up or log in to post comments.
Nathan T 2011-05-27 09:01:12 UTC
0 points

Thales' prediction of an eclipse is overrated and the conclusions drawn by this author are nwarranted. If the ancient Sumerians and Babylonians hadn't left behind records of their own reasoning, then we would have never heard of this character Thales in the first place.

The claim by Mr. Cookingham that Thales' prediction meant "that every man could be his own scientist and philosopher" is to cast Thales as some sort of hero or liberator when the truth is that he was merely following in the footsteps of men who had lived before him. No man can give to another the freedom to think. Men must claim it for themselves. I am astounded that an article as poorly conceived as this one would ever be published here.
Stephen M 2011-05-27 09:05:58 UTC
0 points

It's refreshing to see something about the pioneers from the ancient world. We are too 'modern era' focused and yet the world we live in was built on the shoulders of the Greeks and Romans. (Those who fail to study history....etc., etc.)

The side point about intellectuals too often being so in love with abstractions (and deduction from them) that they are not objective, patient observers is also a good one.
Mark L 2011-05-28 13:08:05 UTC
0 points

Brilliant! Looking to reality/data for insight. Seeing patterns in the data - induction. Extrapolating and applying that pattern to a new context - deduction. Testing your hypothesis - risking your capital/reputation on that hypothesis - reaping the rewards and respect of that.

@Nathan - All Columbus did was sail west. No big deal, right? Actually, it is a HUGE deal. Each innovation is an act of creativity that worked in reality. That is something to admire in itself. Next, it is not the size of the creative leap, but its impact in context that determines its value. It may be inaccurate to attribute this creative leap (data/induction/deduction/test/invest/inspire) to Thales himself. It might be appropriate to give more "due" to the past achievements that he leveraged. Sure.

And, let's not lose the key point: the "integration of multiple past achievements into a new whole" which this story of Thales represents is essentially human--it is something that we all CAN do. Most importantly, it is something to admire, to emulate, to teach, and to revere as a culture.
To post comments, please log in first. The Atlasphere is a social networking site for admirers of Ayn Rand's novels, most notably The Fountainhead and Atlas Shrugged. In addition to our online magazine, we offer a member directory and a dating service. If you share our enjoyment of Ayn Rand's novels, please sign up or log in to post comments.
In the Atlasphere
Search Directory
Books and DVDs » See all
Rob Roy
Starring Liam Neeson

In the Scottish highlands of the 1600s, Rob Roy tries to lead his small town to a better future. When he is framed for theft, however, he's forced into hiding, where his courage and integrity face unimaginable tests... »More
Touched By Its Rays
By Walter Donway