War and purpose: Cossacks in Paris 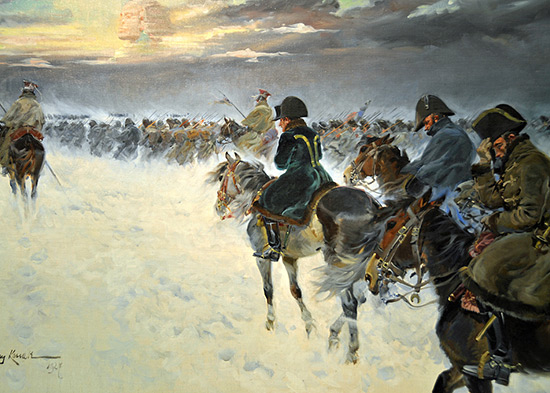 Historical novels remain one of the few genres that capture the world-altering nature of big events, as well as the heroes (and villains) behind them. Set in the same time period as “War and Peace,” Jeffrey Perren’s new “Cossacks in Paris” is starkly different from Tolstoy’s classic, in characters and plot. So how does it measure up, by Randian standards?

Big events. That’s what I love about historical dramas.

These days, Hollywood and modern novels deflate the audience with an uninspiring miasma of small people, personal demons, and futile actions. Art — good art — is more than depression and depravity. Art offers the opportunity to wrench one from the humdrum of daily life and to elevate one’s spirit with heroes transforming the course of history, often facing down long odds.

Historical dramas remain one of the few genres that capture the world-altering nature of big events and the opportunity for heroism.

However, one of the drawbacks of many classic historical dramas, like Tolstoy’s War and Peace, is the lack of purposeful action driving the characters and plot. Tolstoy is stylistically brilliant in many respects, but the drama flatlines as the lead characters drift aimlessly through the trials and tribulations of the Russian aristocracy. Tolstoy’s characters are seemingly resigned to a fate outside the control of their individual decisions.

Napoleon's withdrawal from Russia, a painting by Adolph Northern

Cossacks in Paris covers the same historical period as War and Peace — from Napoleon’s march to Moscow to his subsequent retreat to Paris and ultimate demise. In contrast with underlying flaws of War and Peace, Jeffrey Perren’s novel integrates purposeful decisions and actions that breathes life into the drama and bonds the reader to the characters.

Those readers familiar with Rand’s novels will recognize — and applaud — the primary battle between reason and force.

The reader is first introduced to Breutier Armande, the protagonist, as a man intent on reshaping the future with his engineering perspicacity. Unfortunately for Breutier, his ambitions are thwarted by Napoleon’s grandiose and ill-fated designs to expand his power by conquering Russia.

However, all is not lost for Breutier when he is conscripted into Napoleon’s army. During Napoleon’s march to Moscow, Breutier meets a beautiful Finnish Countess, Kaarina, on a scouting trip to St. Petersburg. Timing proves once again a double-edged sword for Breutier, as his chance encounter with his ideal woman clashes with Alexander’s plans for the young beauty — to marry her off to a brutal Cossack adept at war named Agripin.

Alexander discovers a ready accomplice in Agripin, whose Rousseauian lust motivates him to have Kaarina — by any means necessary. Thus, the stage is set for the central conflict of the novel — a man-of-mind retaining his highest value against men-of-muscle, particularly his tenacious foe Agripin.

The following passage portrays the essence of Agripin, and his desire to conquer Kaarina — and reality — by brute force:

…Once the spy believed the document was genuine Agripin would be in a position to make his demands: land, a title, and Kaarina for a wife.
He had thought “wife,” but the word stood in his mind as “slave” would in another man’s.

Cossacks in Paris by Jeffrey Perren

Agripin’s rationality, if it can be called that, is limited to conniving his way into the spoils of war. This includes Kaarina, who he would rather chain to his bed than have her enter it voluntarily.

Unlike Agripin, Breutier’s efficacy emanates from the power of his mind. Whether evaluating the possibilities of a new railroad, or escaping a brush with the gallows, Breutier is propelled forward by reason. The passage below illuminates Breutier’s ultimate goal of being liberated from the tyrant’s boot:

No one to tell him “no you mustn’t, the Emperor will be annoyed.” No one interested in anything but “how can it be done?”, and “how much will it cost?”, and “when can it be completed?” rather than “who gave you permission?”

Those readers familiar with Rand’s novels will recognize — and applaud — the primary battle between reason and force. No, the novel’s plot does not possess the complexity of what happens when the men-of-mind go on strike. Instead, Cossacks in Paris embarks on the simpler approach of projecting this primary battle back in time using historical events.

While Cossacks in Paris does not carry the sweeping plot and character depth of Atlas Shrugged, Mr. Perren captures the Randian character element of efficacious action lacking in novels like War and Peace.

War and Peace by Leo Tolstoy

By seizing on this Randian element, the plot structure feels like a series of chess moves. Can Breutier convince Alexander that Agripin has betrayed the Coalition’s cause? Will Agripin’s espionage affect the outcome of the war, and thus allow him to acquire Kaarina as a trophy? Will Agripin fall for the ploy when Kaarina’s twin sister, Kaisa, stands in for her?

As each of these moves reconfigures the prospect of certain outcomes, one realizes that the war is a backdrop — almost as if a distraction — to the central conflict of Breutier retaining his queen, not acquiring Agripin’s. With each move and fleeting advantage before the opponent makes his next move, the reader is left gritting his teeth for a resolution, yet paradoxically wanting the drama to continue.

The struggle of Breutier and Kaarina to be together against the milieu of war machinations and a barbarous foe is portrayed best by Metternich’s following statement after observing the animosity between Breutier and Agripin:

Those rulers [Napoleon and Alexander] are merely fighting over a continent. The two young men over a woman. I daresay the latter will always be more passionately pursued than the former, much as it defies logic.

It may defy logic for somebody like Metternich, who is embroiled in political deceptions and a cunning pursuit of power, but it does not defy logic for those who seek the rational goal of a fulfilling romance.

Breutier may not make the fully calculated rational decisions of, say, Atlas Shrugged’s Francisco d’Anconia. However, the impetuousness of young love — such as pursuing Agripin and Kaarina across the Russian steppes, even though Breutier has no knowledge of the region and no initial plan to find Agripin and secure Kaarina from his clutches — distinguishes Breutier from the characters in Rand’s fiction.

Indeed, the reader finds himself tightly gripping the pages as the union of Breutier and Kaarina is constantly undermined by the political calculations of rulers, the switching allegiances during the uncertainty of war, and a Cossack intent on winning the prize, even though the prize has no desire to be his bloodlust trophy.

So intense is the rivalry between the two that Agripin actually saves Breutier’s life during one of the battles — all so Agripin can preserve his desire to kill Breutier with his bare hands, as he tells Breutier.

Mr. Perren’s economical style keeps the pages turning and the reader craving a resolution. During the succession of battles and chess moves leading up to the synchronized climax of a fight over a woman intersecting with a war for that era’s center of civilization — Paris — a question seems to continually beat at the back of the reader’s mind: Will a man’s passionate pursuit of a woman prove more powerful than a ruler’s quest for an empire?

Michael Moeller has worked as a chemical engineer/inventor for over fourteen years, and for the last four years has worked in a dual capacity as an engineer and intellectual property attorney. Additionally, Michael is a burgeoning entrepreneur and has just formed a new startup company. Michael has studied Objectivism since his mid-teens, and has published articles on multiple websites, including The American Thinker.

The cover photo at the top of this article was taken by Dennis Jarvis.

To post comments, please log in first. The Atlasphere is a social networking site for admirers of Ayn Rand's novels, most notably The Fountainhead and Atlas Shrugged. In addition to our online magazine, we offer a member directory and a dating service. If you share our enjoyment of Ayn Rand's novels, please sign up or log in to post comments.
John C 2013-07-23 07:21:30 UTC
4 points

Sounds interesting. The novel is already in my Kindle and I look forward to reading it before the summer is finished.
(profile not found) 2015-09-23 09:35:45 UTC
4 points

I love the new site!! I know how much time, thought, and hard work it takes to bring a new site to fruition. You've done it, and beautifully! I'm raising my glass of tea to you in celebration of this enormous achievement!!! Hopefully, one day I'll have the pleasure to clink glasses with you personally!
animal jam| happy wheels| cool math games| 8 ball pool| sudoku| yoob| friv| tetris| friv4school|
Jurgis (George) B 2013-07-23 15:34:28 UTC
2 points

Thanks much for the review. I'll get the book and look forward to reading it.

I'm puzzled, though, why you don't have anything on your site (as far as I could tell) on Gen LaGreca's recent A DREAM OF DARING or her earlier NOBLE VISION. Both are great reads, with something important to say--and I believe admirers of Rand woudl love them. Maybe Kristi Minsaas would write reviews (though I don't know if she has read them). They very much deserve attention.
Jurgis Brakas
To post comments, please log in first. The Atlasphere is a social networking site for admirers of Ayn Rand's novels, most notably The Fountainhead and Atlas Shrugged. In addition to our online magazine, we offer a member directory and a dating service. If you share our enjoyment of Ayn Rand's novels, please sign up or log in to post comments.
In the Atlasphere
Search Directory
Books and DVDs » See all
Collateral
Starring Tom Cruise

Michael Mann's crime thriller pits an ordinary man against an ubermensch, a true force of nature. The result is one of the most stylized, intriguing crime movies in years. See Joshua Zader's review for the Atlasphere... »More
Touched By Its Rays
By Walter Donway