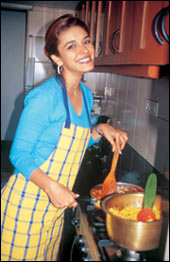 A new article in the Times of India delivers yet another beautiful Indian celebrity who is an admirer of Ayn Rand’s work: Singer, actress, and anchorwoman Raageshwari.

It is Ayn Rand’s Atlas Shrugged which has helped singer and actor Raageshwari acquire a similar broad perspective of life. “In this world everybody tries to exploit the creative mind for their own benefit. A fact which I resented greatly and which caused me untold trauma till I read this wonderful book.

“It made me less angry about such situations and gave me the strength to fight them.” However, it was Robert James Waller’s Bridges of Madison County which keeps the hope in this young romantic’s heart alive “that I will meet my soulmate someday. And hopefully, I will not be married by then!” she chuckles.

You can learn more about Raageshwari at India-Today and in her bubbly culinary profile at Upper Crust India, from which this photo was taken.

In the past, we’ve noted several other beautiful Indian celebrities who are also fans of Ayn Rand’s writings: Miss “India Earth” Niharika Singh, actress Preity Zinta, and India’s first woman astronaut, Kalpana Chawla, who was tragically killed in the Columbia shuttle explosion. Then there’s India’s richest woman, Kiran Majumdar-Shaw. And fashion model Lakshmi Rana has also dipped her toe in the world of Atlas Shrugged, though we don’t yet know what she thought.

Let’s just say, if you’re a single fellow looking for a beautiful and intelligent bride — or even just someone to lust after — you should not overlook the jewels of India.

And we’ll give a free Atlasphere subscription to anyone who can persuade one of the starlets above to join the Atlasphere’s dating service!

In the Atlasphere
Search Directory
Books and DVDs » See all
The Ideas of Ayn Rand
By Ronald E. Merrill