The situation may not be as simple as “Living Under Capitalism = Being Happier” but a new article in New Scientist called “Wealthy Nations Hold the Key to Happiness” suggests that such a conclusion is not far from the truth. 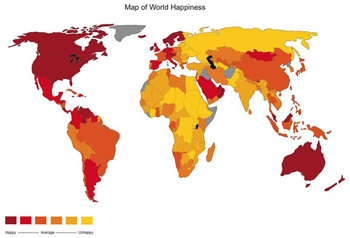 According to the analysis, a countryâ??s happiness is closely related to its wealth, along with the health and education levels of its people. It is no surprise that people spending heavily on healthcare, such as US citizens, rank highly, says White, as this investment increases life expectancy and general wellbeing.

“There is a belief that capitalism leads to unhappy people,” he says. “However, when people are asked if they are happy with their lives, people in countries with good healthcare, a higher [earnings] per capita, and access to education were much more likely to report being happy.”

Many thanks to friend and political-happiness scholar Will Wilkinson for calling this new article to our attention.

This certainly adds an interesting twist to the “Materialism = Unhappiness” equation that we hear advanced a lot, implicitly or otherwise, in American Buddhist and leftist circles.

Here is an interesting tidbit:

Countries that rank in the top 20 in both Whiteâ??s list and the Happy Planet Index â?? presumably very happy places indeed â?? are Costa Rica, Bhutan and Antigua and Barbuda.

I wonder what these countries have going for them.

In the Atlasphere
Search Directory
Books and DVDs » See all
The Ideas of Ayn Rand
By Ronald E. Merrill

An independent and thoughtful (sometimes controversial) examination of Ayn Rand's life, novels, and philosophy. See Neil DeRosa's review at the Atlasphere... »More
The Art of Living Consciously
By Nathaniel Branden

Perhaps Branden's greatest book. (See Joshua Zader's review at the Atlasphere.) Identifies and describes the psychological and philosophical requirements of living the conscious, purposeful life that Rand advocated in her novels... »More
View our full store »