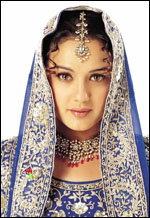 From a new article in The Hindustan Times about actresses with a passion for reading:

They are hot. They are sassy. They are sexy. But mind you, they are not dumb! We’re talking about the Bollywood starlets. Check out what some of these gorgeous actresses manage to indulge in despite having a pressure-cooker kind of life.

Whenever some actresses are off work, all they are glued on to is…Books! Reading has influenced their thinking in many ways. The starlets have drawn inspiration from reading award-winning novels.

They believe that books have influenced their lives as much as other important social and professional events. Actress Preity Zinta is among the passionate readers club, who finds Ayn Rand’s Fountainhead as one of the most influential book of all time. “I have read this book several times till now and still whenever I find time, I like to read it again. This is the book, which has influenced me a lot. Initially when I read this book, it was difficult for me to understand it but later on when I read it again, I realized the importance of its character,” explains Preity.

Talking further about the book she says, “The character of Howard Roark in this book has inspired me very much. He is a man of strong will who faces big problems in life but wins over them with his wisdom and endurance.”

Her father gave her the book when she was in 8th grade. See our earlier post on this topic for additional background.