As of today, the Atlasphere has over 20,000 admirers of Ayn Rand’s novels in the member directory, which is our biggest milestone in years.

When we launched the site in 2003, I remember thinking that if the site was really successful we might have as many as 20,000 members from all over the world. It’s quite surreal to see that this has come to pass.

Those of you who have only joined recently may enjoy reading about the Atlasphere’s origins.

My thanks to all of you who have supported the site, either through being one of our original sponsors, buying a subscription, inviting your friends to join, or sending us suggestions for how to improve the site.

We are always thrilled to hear from couples who meet through the Atlasphere and fall in love.

The newest couple to contact us, Brian Iarossi and Jen Martin, agreed to let us post this photo from their wedding last weekend. These two look amazing together! 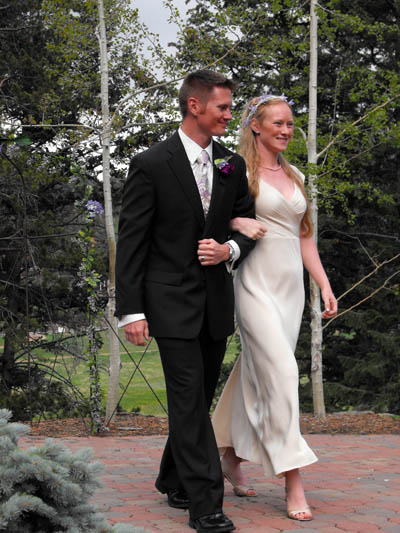 Congratulations to Brian and Jen. 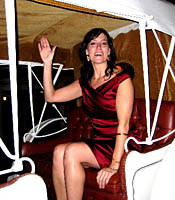 A member of our dating service, Theresa, has offered to coordinate an informal dinner outing for members of the Atlasphere’s dating service who will be attending OCON 2009 in Boston this July.

In addition, we have created a section where we list the men and women in our dating service who will be attending the conference, so you can start getting to know one another before the conference begins.

Any member of Atlasphere’s dating service can add him- or herself to these lists, using the form provided at the top of these pages.

We hope you find this new feature helpful. My wife Kathy and I met at a summer conference in 1999, so we’re always happy to vouch for just how valuable these can be when you are looking for a soul-mate.

If you have questions or need any assistance, please contact us.

Much as we did for the 2004 election, this month the Atlasphere would like to publish a series of articles called “The Case for John McCain,” “The Case for Barack Obama,” and “The Case for Bob Barr” — laying out the pro-Rand arguments for each of the candidates in this year’s election cycle.

We have an excellent candidate for the McCain piece, and would like to receive submissions for the Obama and Barr pieces.

If you’d like to be considered for the slot, please review our writers guidelines and send your draft article to us (editors AT theatlasphere DOT com) in MS Word format.

I spent the past a week setting up a new dual-core server for the Atlasphere, moving our site onto it, and ironing out the seemingly-endless bugs that come along with making a giant OS upgrade.

On the upside, the new site seems screamin’ fast from where we stand. Hopefully you’ll find the same!

If you run into any remaining bugs, please let us know. Yesterday was a particularly buggy day (login problems, etc.) and I apologize to those of you who were temporarily inconvenienced.

We’re still hoping to launch a complete overhaul of the site, perhaps later this year, using the Ruby on Rails platform. In the meantime, this current upgrade was strictly for performance and reliability purposes.

A story in the style section of today’s New York Times begins:

STEPHANIE BETIT first read Atlas Shrugged, The Fountainhead and Ayn Rand’s essay collection The Virtue of Selfishness in 2004. The books changed her life, she said, turning her from a devout Christian into an atheist and a follower of objectivism, Rand’s philosophy of independence and rational self-interest.

“From then on, I was looking for a partner who shared my outlook on life,” said Ms. Betit, a 28-year-old teacher working with autistic children in Walpole, N.H.

Finding him proved a challenge. Last fall, she met someone while volunteering for the Republican presidential hopeful Ron Paul, but the affair was as ill-fated as the campaign itself.

By winter she had all but given up on love. Then a friend told her about TheAtlasSphere.com, an online dating site for Rand fans. Ms. Betit posted a profile, which caught the attention of James Hancock, 30, the chief executive of a business software company in Orillia, Ontario. He sent her an e-mail message, and within a few days they graduated to talking on the phone. Three months later, they were engaged.

Mr. Hancock had tried mainstream dating sites in the past, but “no one even marginally piqued my interest,” he said. “Women who don’t know or follow Rand tend to just accept what they’ve been told. I can’t be with someone like that in the long-term.”

See the full story for more, including a photo of Stephanie and James.

We’ve had more than 100 140 new members join in the last 24 hours, on the strength of this mention in the NY Times Book Review.

One of our new subscribers just sent us the following feedback, which highlights a key aspect of the Atlasphere’s business model that most members probably aren’t aware of:

…Speaking of credit, I’d like to “credit” the Atlasphere for not requiring that both boy and girl be subscribed in order to communicate through the dating site. As you know, Match.com and others require both parties to subscribe before communcation can occur, and so a large percentage of the “available” women (and men, I’ll guess) on these sites are not truly available because they haven’t subscribed. This is borderline fraud in my opinion, and I’m glad to see that at least one site has the integrity to be fair to its customers…but I shouldn’t be surprised, because this is exactly what one would expect from an Objectivist-affiliated business.

Keep up the good work!

Couldn’t have said it better myself. When the person you’re writing to must have a paid subscription to respond, and less than 1% of the members have subscriptions (which is quite common on mega-sites like Match.com), that means you’re 100 times less likely to be able to strike up a conversation — and your subscription has 1/100th the value you thought it would.

The Atlasphere’s policy, here, is beneficial not only for subscribers, but for free members as well — because even if you don’t have a subscription yourself, you can still meet people on the Atlasphere by simply replying (for free) whenever a subscriber contacts you.

And neither of you must figure out stealthy ways conceal your e-mail address in your message.

Q: What do the web sites for (a) The Atlasphere, (b) Ayn Rand protÃ©gÃ© and novelist Erika Holzer, (c) the American adaptation of the Italian We the Living movie, (d) Ayn Rand biographer Barbara Branden, and (e) Objectivist philosopher Stephen Hicks’s Center for Ethics and Entrepreneurship all have in common?

A: They were created by Zoom Strategies.

I’m one of the founders of Zoom. We just launched a sleek new web site with our updated portfolio and testimonials from many of our happy clients: 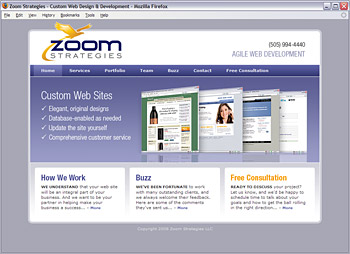 If you know someone who may be in the market for a top-notch web site, please spread the word.

Australian Objectivists are urgently seeking financial assistance to advertise ‘In Defence of the Corporation’, a one-day conference for CEOs to be held in May 2008 in Sydney.

Â· Dr Alex Robson, lecturer in economics at the ANU.

These are the conference topics:

Â· The moral right of corporations and their shareholders to maximise their profits, and the importance of speaking out for this right.

Â· The enormous contributions that corporations make to our standard of living.

Â· The types of attacks: the media, NGOs, existing and impending legislation.

Â· The source of the attacks: the anti-capitalist mentality, environmentalism, traditional morality.

Â· A contrasting code of morality: one that sees capitalism as the only moral social system and money-making as a noble endeavour.

Â· A strategy for resisting these attacks.

Supporters have so far contributed $1,150. We need to raise $1,980 by Thursday the 29th November for a quarter-page display on p.5 of The Wentworth Courier, a suburban weekly with a readership of 99,000 in Sydney’s affluent eastern suburbs.

Following is the proposed text of The Wentworth Courier ad, which is designed to attract wealthy Ayn Rand fans willing to sponsor the conference.

In Defence of the Corporation

The time has come to take a stand.

You are under attack from all sides. You – who through your daring imagination and risk taking, have built products or services that enrich us all – endure constant criticism from the greens, from the media, from the unions, from the social welfare lobby. Instead of gratitude for your inspiring achievements – which continue to raise our standard of living – you face threats from politicians to shackle you even further.

Intellectual ammunition will be provided at a one-day conference in Sydney in May 2008.

This conference cannot proceed without your financial support/sponsorship.

For more information: contact Nigel Richards by email at info (at) enterpriseethics.com.au or on 0417 065 047.

The Atlasphere recently published its 500th column — which happened to be Jacob Sullum’s “Sizing up Fred Thompson’s Federalism.”

Coincidentally, we’ve also begun collecting reader feedback on all of our columns. This form for submitting your feedback appears at the bottom of each column, and is open to all Atlasphere members, paid or unpaid.

Your feedback will be e-mailed to the author — assuming he or she has an Atlasphere profile, as the vast majority of our authors do — as well as to me and Atlasphere Editor Phil Coates. We’ll use your ratings and comments not only to help guide future publishing decisions, but also to provide periodic lists of our “top rated columns.”

In addition, we’ll be culling our very best reader feedback for a “letters to the editor” feature for each column we’ve published. Expect this feature to show up within a few weeks, and it will apply retroactively — i.e., once we launch it, we’ll be publishing some of the feedback you submit between now and then.

We quietly launched our feedback feature a couple weeks ago, and many of you have already availed yourself of it. In fact, as of this moment we’ve collected 353 ratings from 150 members on 96 different articles.

Currently, our two top-rated columns are Jessica Bennett’s “Which One Are You?” (from the Atlasphere archives, originally published in 2004) and Paul Hsieh’s new ARI-distributed Op-Ed “‘Single Payer’ Health Care Is Hardly Free.”

If you would like notification each time we publish a new column, you can turn that on by updating your notification preferences or by entering your e-mail address in the “Get Notified” box at the bottom of any column.

As always, please contact us if you have questions or suggestions for further improving the Atlasphere.

The acclaimed guide to personal finance and the creation of wealth. Learn what the rich teach their kids about money, that the poor and middle class do not... »More
The Capitalist Manifesto
By Andrew Bernstein

The definitive case for capitalism, cataloging not only the historical and practical reasons for its success, but also the moral case for capitalism as a political system. See Joshua Zader's review at the Atlasphere... »More
View our full store »